Paranoid People Can Be Right But Can We Be Happy? 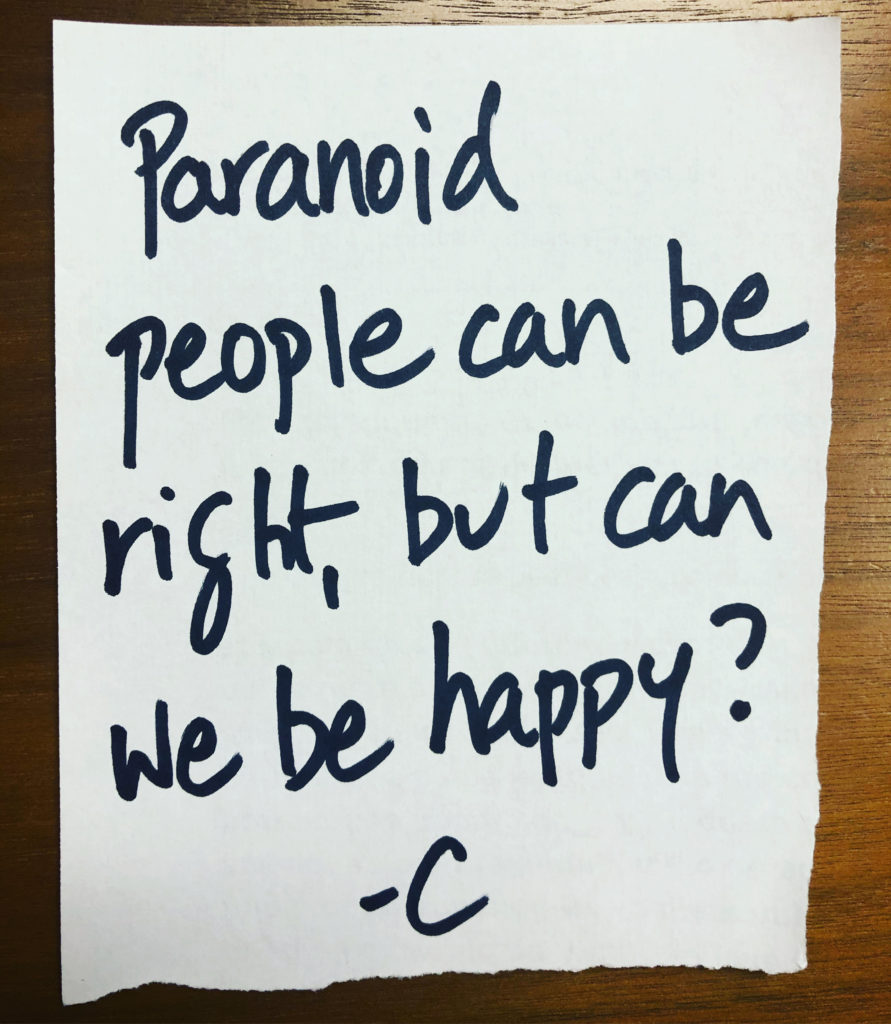 Are you motivated most by avoidance or desire?

Avoidant leaning folks like me tend to be able to see the worst case scenario easily in any situation. When we avoidants go too far we venture into paranoia. “Nothing is going to work.” “Everyone’s out to get me.” “Everything I do is wrong.” There’s no quicker way to be wrong than to think a version of “All ____ are ____.” When avoidants venture into paranoid town our chances at relief plummet and our chances at happiness dwindle to zero.

The desirous among us know what they want and they go for it. At least that’s my understanding. Gone too far the desirous don’t get paranoid they get obsessive. In the extreme there’s seemingly nothing else in the world save for the object of the obsessive’s desire. “To hell with the consequences, I’m getting, doing, thinking about, pursing ‘the thing’.”

Like with any dialectic both avoiding pain and pursuing pleasure are important motivations. The trick is to have both desire for what you want and protection for yourself. BOTH/AND.

Education, Coaching, and Intensive Therapy for:

No one comes to a therapist to brag about how great their life is going. We all come to therapy at one point or another because everything we could think to try on our own to make our lives happier hasn’t worked well enough. I was no different. Mine is a recovery story.

At one point in my life I had Major Depressive Disorder (Recurrent), Generalized Anxiety Disorder, and Alcohol Abuse. Those titles don’t include the dependent personality that I carried around inside my head and heart for most of my adult life. Today, I don’t meet any diagnostic criteria. I’m in remission so to speak.

As you might have guessed my own therapy was essential to my recovery. I liked it so much that I decided to do it for a living. When I first walked into a therapist’s office I had no idea what I was getting into. I just knew that I tried everything that I could think of to make life better and none of it worked. I needed new ideas, new approaches, new strategies to make my life good. Though therapy and a bunch of other things I got what I needed. My life is good. Yours can be too.

I’m a cisgendered heterosexual white guy in my 40s. I’m also a clinical social worker and a psychotherapist. I love working with people who want better relationships. I provide relationship therapy, individual therapy, and sometimes family therapy. I’ve been practicing privately since 2006. I see clients in my office and more often now over a telemedicine platform. It’s like FaceTime with better security. I’m licensed to practice in Texas and in Colorado.

Prior to opening my psychotherapy business I was a staff social worker at The Menninger Clinic in Houston, TX. I did family therapy as part of their adolescent treatment team. I was also a behavior therapist in Menninger’s now closed Obsessive Compulsive Disorders treatment program.

I must like school more than I thought when I was a kid because I’ve been to a lot of classes. My bachelors degree is in business from Southern Methodist University in Dallas, TX. I got a Master of Business Administration and a Master of Social Work from the University of Houston. I’ve done three fellowships in my career. The first was at the Baylor College of Medicine. The second was at the Menninger Clinic for that OCD program. The third was at the Houston/Galveston Psychoanalytic Institute. I trained at the Gottman Institute in Seattle, WA up to level three (their are four) and I’m a member of Esther Perel’s online training salon called Sessions. Gottman’s and Perel’s programs focus on relationships. My next training opportunity is a University of Michigan certificate program in sex therapy and sex education.

I was a business person before I became a psychotherapist. I started my career working in my third generation family business. I was the Director of Human Resources in the 1990s. I led a group of environmental testing laboratories in the early 2000s. I returned to run the business after my parents died. The business is still going strong although I’m no longer associated with the firm.

I’m also the author of the self help book The Art of Meaningful Living. It was published in 2009 and sold dozens of copies nationwide.

Kudos if you’ve read this far and thank you.